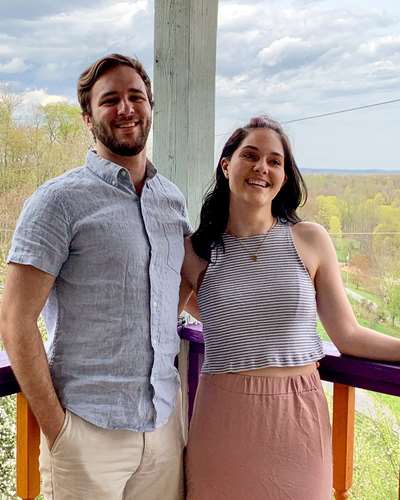 It's definitely a message I want to get out to incoming freshmen. Get involved, just get involved any way you can. The connections you can grow, the relationships that you make - it's so worth it.

You probably recognize Luke and Leia, T'Challa and Shuri, and Ron and Ginny. But if you’re part of the West Virginia University School of Public Health, you might be more familiar with Harry and Lakin. It’s been less than two years since the pair met during their first semester in the Master of Public Health in Social and Behavioral Sciences program. In that short time, they’ve not only found their place in a program they didn’t initially plan on joining, but they’ve also become leaders. As president and vice president of the Student Association of Public Health, they’ve been able to build relationships and keep fellow students connected while spending most of their graduate school experience online. Now that the pair is getting ready walk across the stage at Commencement, we look back at their journey to public health and how they became the dynamic duo

Heading in Opposite Directions

Let’s start before the beginning. Prior to setting out on their academic journeys in public health, it seemed like this duo would never cross paths. Harry comes from a family of dentists and thought he would be headed in that direction after earning his undergraduate degree from Radford University. Lakin completed her undergraduate degree in criminology and passed the LSAT, heading in the direction of law school.

But after some discussion, a little googling and campus visits for different programs (dentistry and law), their internal GPSes rerouted them to the School of Public Health.

Why did you choose WVU?

After navigating their way to the Master of Public Health program, Harry and Lakin found themselves in the same classroom … then the same group chat … then the same campus job … then the same leadership team. They started the master’s program in fall of 2019, so after just one full semester of classes and a couple of additional months of on-campus classes, they shifted to online classes as the world started to respond to COVID-19. Looking back, Lakin says starting that group chat was one of their best decisions.

How have you been able to build relationships with your fellow classmates?

How have the faculty made an impact on your experience?

The road to president and vice president of the Student Association of Public Health (SAPH) was paved with pizza. With the promise of free food, Harry and Lakin attended their first SAPH meeting just a few weeks into their first semester in the School of Public Health. The organization was one more way for them to get to know their fellow students and it would become a shared growth opportunity. Harry was the first one to dive into a leadership role as president and soon called on Lakin to serve by his side.

How did you get involved in a leadership role with SAPH?

Why is it important to get involved?

Arriving at the Final Destination

Although this dynamic duo (yes, people really do say that about them) has arrived at graduation, they won’t be splitting up anytime soon. Lakin has accepted a position in the Office of Health Services Research as a research assistant and Harry is ready for dental school. Their journeys to public health might have started on different paths, but they were able to grow together and develop a lifelong connection.

What’s something you’ll miss after graduating?

Looking back on their journeys and thinking about advice for those who might be considering a degree in public health, Harry and Lakin both say to follow your dreams. Although they didn’t follow their initial plan – law school and dental school – they’re achieving their goals and say they’ve “come full circle.”

Why should someone choose public health?

For your convenience, below are each of the audio clips from above with transcripts. Clips are available for download.

Why did you choose WVU?

How have you been able to build relationships with your fellow classmates?

How have the faculty made an impact on your experience?

How did you get involved in a leadership role with SAPH?

Why is it important to get involved?

What’s something you’ll miss after graduating?

Why should someone choose public health?