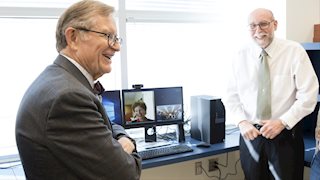 Earlier this year when Mary J.C. Hendrix was named president of Shepherd University, she had a critical decision to make: To shut down her research laboratory at Northwestern University or relocate her groundbreaking cancer research closer to Shepherd.

Although Shepherd has strong undergraduate science programs, it does not currently have the laboratory facilities necessary to support a nationally-competitive cancer research team.

The answer came in a unique partnership with West Virginia University, a major R1 research university 150 miles to the west of Shepherd. Thanks to sophisticated Skype technology, Hendrix and her laboratory are able to resume daily research interactions.

“We are grateful to WVU for the opportunity to continue our cancer research and work with talented scientists at the WVU Cancer Institute. Together, we will advance cancer diagnostics and new therapies for the benefit of all West Virginians.”

A laboratory team led by Hendrix shook up the cancer research world with a new and controversial theory: that aggressive tumors create their own vascular systems to circulate blood and nutrients from the body to help them rapidly grow.

It led to a hot scientific debate – chronicled this summer in a retrospective in Science, the magazine of the American Association for the Advancement of Science. The once-radical idea is now the basis for a promising area of cancer research and the development of new therapies, and Hendrix and her research team have continued to experiment and publish in this area. Their latest article appeared in late October in Laboratory Investigation, a journal from the Nature Publishing Group.

Hendrix was able to move her ongoing research – and several of her team collaborators – from their former laboratory at Northwestern University in Chicago to West Virginia University to continue their work. Elisabeth A. Seftor, Richard E.B. Seftor, and Naira V. Margaryan joined the WVU Cancer Institute’s research team this fall and will work in a state-of-the-art lab on WVU’s Morgantown campus.

WVU President E. Gordon Gee loves the arrangement. “If Shepherd had not hired her as President, she’s exactly the kind of researcher we would love to have recruited to move WVU’s cancer research program forward,” he said. “Now West Virginia has an even better deal – Shepherd gets a nationally-recognized researcher as President and we add to the research strength of WVU. It’s a win for everyone.”

"It's critical to have an open and convenient way to communicate during our daily work in the laboratory," said Richard Seftor. "Our work benefits from contributions of all members of our group, including President Hendrix. We can plan and discuss experiments as a group, and discuss results as soon as they are generated."

An open video portal for Skype communication is available every day to facilitate the rapid interactions between the researchers at WVU and Hendrix  -- to conduct data analysis, proposal and publication preparation in real time. “This is a new era in communication platforms, and we are the first in the state to advance this application for cancer research,” Seftor said.