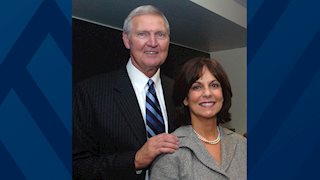 “We are happy to partner with other WVU athletes to help provide a comforting space for the children and their families as they go through a most difficult time,” the Wests said in a statement. “West Virginia and WVU hold a very special place in our hearts.”

A native of Chelyan in Kanawha County, Jerry West is universally considered one of basketball’s all-time greats. Whether shooting a long jump shot, making a big steal, or pulling down a clutch rebound, he could do it all. Owner of 17 WVU records, West led the Mountaineers to three of their greatest seasons on the hardwood, winning 81 of 93 games while he was in the lineup and coming within two points of winning the national championship in 1959.

West was taken in the first round of the National Basketball Association (NBA) draft by the Lakers (No. 2 overall) and spent 14 seasons in Los Angeles. During his NBA career, he compiled just about every honor possible. An All-NBA first team selection seven times, West also made the All-NBA defensive team four straight years from 1970-73.

West was the fifth player in NBA history to surpass the 6,000-assist mark, and when he chose to retire in training camp before the start of the 1975 season, he ranked among the NBA’s top 10 in career scoring, minutes, field goals, and field goal percentage.

Known as “The Logo” for being the inspiration for the NBA logo, West served as general manager and president of the Lakers, helping them to five NBA titles in the 1980s and six overall (he was named NBA Executive of the Year in 1995) before retiring after the 2000 season. West came out of retirement to become general manager of the Memphis Grizzlies in 2002, earning NBA executive of the year again in 2004 before retiring a second time in 2007 after guiding the franchise to NBA championship contention and the team’s first-ever playoff appearances.

West’s NBA executive talents came into play when the Golden State Warriors coaxed him out of retirement to be a consultant and executive board member with the team in 2011. His guidance helped return Golden State to a championship-caliber franchise. In 2015, the Warriors produced the best record in the NBA and won the league championship, West’s seventh as an NBA executive. The following season, the Warriors set the NBA record for regular season wins with 73.

He is currently serving as a special advisor to Steve Ballmer and the Los Angeles Clippers.

West’s mark on WVU and Los Angeles Lakers basketball has been permanently commemorated with statues of him that stand outside the WVU Coliseum and the Staples Center.

In June, it was announced that West would be receiving the Presidential Medal of Freedom, the nation’s highest civilian honor, for his work on and off the court.

The gift from the Wests will be put toward an initiative started by Jeff Hostetler, former WVU and NFL quarterback and co-chair of the WVU Medicine Children’s Capital Campaign, to create a WVU sports-themed floor in the new tower, where patients can get away from their rooms and just be kids.

The floor will be designed to look like a WVU locker room, complete with jerseys, helmets, and other sporting equipment. The floor will be decked out in the traditional WVU gold and blue and will have multiple televisions. Photos of former WVU athletes will line the walls, and sports-themed games, like foosball and air hockey, will be available.

“We are very grateful for Karen and Jerry’s incredibly generous gift in support of our new WVU Medicine Children’s tower,” Albert L. Wright, Jr., president and CEO of the West Virginia University Health System, said. “It is very fitting that someone who has been a West Virginia legend, national icon, and source of inspiration for generations is now a part of something that will benefit future generations of West Virginians for years to come.”

The 150-bed, nine-story tower is scheduled to be completed in 2021. In addition to the WVU-themed floor, the tower will include:

All of the inpatient rooms will be private, except for nine NICU rooms for twins. The tower will also include inpatient and outpatient pharmacy facilities and a cafeteria.

The gift was made through the WVU Foundation, the non-profit organization that receives and administers private donations on behalf of the University.

Former athletes, individuals, and businesses interested in supporting the expansion of WVU Medicine Children’s should call 304-598-4346. Additional information on the “Grow Children’s” Capital Campaign can also be found at WVUMedicine.org/GrowChildrens.

WVU in the News: What Medicare For All could mean for WV