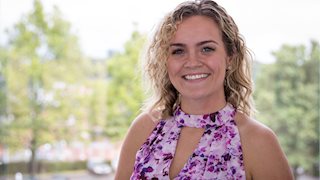 Jenna Nypaver, a graduate student pursuing a master’s degree in integrated marketing communications at West Virginia University’s Reed College of Media, is the latest recipient of the Don Marsh Scholarship in Healthcare Writing. The scholarship includes a tuition waiver and a paid internship in the University Relations office at the WVU Health Sciences Center.

Nypaver received her bachelor of science degree in journalism with an emphasis in strategic communications from WVU. She previously worked as an intern at the WVU Alumni Association focusing on philanthropy communications.

The scholarship honors West Virginia journalist Don Marsh, who was employed at the Charleston Gazette for 40 years – first as a reporter, then as an editor and columnist. Marsh gained a national reputation for exposing arrogance, corruption and hypocrisy through his work as a journalist. He became editor of the Charleston Gazette in 1976 and won The American Society of Newspaper Editors Distinguished Writing Award for commentary in 1987.

After his retirement from the daily newspaper, Marsh was a commentator on the West Virginia MetroNews radio network until his death in 1999.

Nypaver is the daughter of James and Debbie Nypaver and a 2014 graduate of Uniontown Area High School.