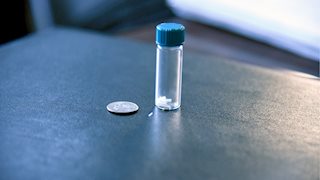 Photo caption: The clonidine micropellet, shown next to a dime for size comparison, is implanted in a patient's lower back to combat sciatica pain for up to one year. (Photo courtesy of Sollis Corp.)

MORGANTOWN, W.Va. – As part of an ongoing commitment to battle opioid addiction, the Rockefeller Neuroscience Institute (RNI) at West Virginia University today (Nov. 15) marked a major milestone, enrolling the first patient in a randomized clinical trial that will test the effectiveness of an injectable non-opioid, non-steroid micropellet to treat sciatica.

The clonidine micropellet, shown next to a dime for size comparison, is implanted in a patient's lower back to combat sciatica pain for up to one year.

The phase III clinical trial utilizes a clonidine micropellet, which is half the size of a grain of rice and is placed in a patient’s lower back to combat sciatica pain for up to one year. The procedure was successfully completed this afternoon.

“Innovative technologies that act directly at a target location like this micropellet are crucial to reducing the need for systemic medications and opioids for chronic pain,” Ali Rezai, M.D., executive chair of the Rockefeller Neuroscience Institute, said. “Our hope is that we can look back on this day and say we made a significant advance in the ongoing efforts to treat chronic pain and combat the opioid crisis.”

Dr. Rezai is not directly involved in the trial as he serves as a scientific advisor to Sollis Therapeutics, the Ohio-based interventional pain company developing the micropellet.

With more than five million people in the U.S. affected by sciatica – one of the most common causes of back and leg pain – the Sollis micropellet can potentially provide patients with a pain-relief solution and an alternative to addictive opioid pain medications. Unfortunately, in many cases, currently available treatment options for the pain management of sciatica and other back pain have inadvertently led to opioid abuse.

“Having the opportunity to investigate new non-opioid treatments for sciatica and a range of pain conditions is directly aligned with the WVU Medicine Center for Integrative Pain Management’s mission to combat the opioid crisis in West Virginia and nationwide,” Richard Vaglienti, M.D., principal investigator and director of the Center for Integrative Pain Management, said.

“Our doctors and researchers at the Rockefeller Neuroscience Institute continue to do amazing things that will help make all of our lives better,” President Gordon Gee said. “This kind of ground-breaking research would not be possible without the assistance of many people, including Gov. Jim Justice, Rep. David McKinley, and Senators Shelley Moore Capito and Joe Manchin, all of whom have been fully supportive of these initiatives.”

In West Virginia, where the number of opioid-related deaths is on course to set a record for overdose deaths this year, the micropellet procedure – if successful – could one day be a game-changer.

“Knowing that even a single day of opioid usage is associated with a probability that the patient will be taking opioids a year later underscores the need for innovations like ours to impact the opioid crisis,” Gregory Fiore, M.D., president and CEO of Sollis Therapeutics, said. “We are pleased to team up with the researchers at the WVU RNI and other sites nationwide.”

Additional patients are expected to participate in the study at WVU. To see if you or a family member might be eligible, please contact Angela Pugh by emailing adpugh@hsc.wvu.edu or calling 304-293-6780.

The West Virginia University Rockefeller Neuroscience Institute is a global leader in the discovery, development, and delivery of world-class research in human performance and brain health. It includes the clinical, research, and academic missions of the WVU Departments of Neurosurgery, Neurology, and Behavioral Medicine and Psychiatry, as well as several other academic departments across the university. The Institute spearheads efforts to develop innovative solutions for West Virginians and those across the world with neurological and psychiatric conditions ranging from Alzheimer’s to Parkinson’s; autism to stroke; and paralysis to chronic pain, addiction, and traumatic brain injury. For more information on the WVU Rockefeller Neuroscience Institute, visit wvumedicine.org/RNI.