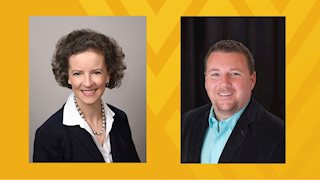 Anna Buchanan has been named vice president of finance and chief financial officer, and Justin Ruble has been named director of human resources. Both appointments became effective Monday (April 2).

Prior to that time, Buchanan worked in financial planning for Value America in Charlottesville and Enron Capital and Trade Resources in Houston, Texas. She also worked as a reservoir engineer for ConocoPhillips in Oklahoma, Louisiana.

Buchanan holds a Master of Business Administration from the University of Virginia’s Darden School of Business and a Bachelor of Science in Petroleum Engineering from West Virginia University.

Ruble joins WVU Medicine from Blue Ridge Community and Technical College, where he most recently served as vice president of human resources. He brings more than 13 years of progressive human resources experience and has held leadership roles in manufacturing and higher education since 2007.

An Eastern Panhandle resident, Ruble received his Master of Arts in Corporate Communications from West Virginia University and his Bachelor of Arts in Broadcast Journalism from Marshall University.

“I am pleased to welcome Anna and Justin to WVU Medicine as part of our University Healthcare executive leadership team,” Zelenka said. “They both bring a wealth of knowledge and leadership experience to their new positions, and we look forward to their positive contributions.”