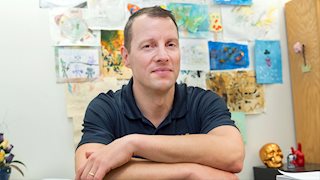 In Iceland, drug, alcohol and tobacco use in teens has been “virtually eradicated” as a result of a nationwide push to replace teens’ unsupervised, aimless leisure time with purposeful, organized activities. Now, a West Virginia University researcher is transplanting the program to West Virginia and hoping it takes root.

Alfgeir Kristjansson, an assistant professor in WVU’s School of Public Health, is studying data related to teen substance abuse in West Virginia. In 2016, his findings showed that at one high school in Wood County, 27 percent of students had smoked cigarettes, 41 percent had consumed alcohol and 20 percent had smoked marijuana.

The results are in stark contrast to groups of teens that he studied in Iceland, where researchers helped implement a successful substance abuse avoidance program.

Kristjansson is building on the survey results from both countries and working with allies in Wood County—teachers, parents, police officers and health professionals—to alter middle- and high-schoolers’ home, school and social lives to disincline them from using drugs and alcohol. He is expanding the project into Calhoun County.

Although the programs Kristjansson will help develop in Wood and Calhoun counties will reflect local needs and community input, they will also share with the Icelandic program—and related programs in the United Kingdom and across Europe—an emphasis on peer groups.

“Kids in upper middle and high school are products of their social environment and are at the greatest risk for taking up drugs and alcohol,” Kristjansson said. “We have learned that individual-level interventions—teaching kids to take responsibility for their choices—is inadequate. The reason is that kids behave very much like their peer group and their community. Yes, they have parents, and parents are very important, but they’re only one variable in the mix.”

Because teens don’t make decisions in isolation, Kristjansson doesn’t just collect data on what substances they use. He also investigates how teens obtain cigarettes and alcohol, how often they spend time with their parents during the week, whether their parents know their friends’ parents and whether parents keep tabs on where children are in the evenings.

He concerns himself not only with teens’ grades in math and English, but also with how comfortable they feel talking to their teachers, whether they think school rules are fair and whether they’re bored with their studies.

Those and other data inform choices of prevention strategies. Kristjansson says he seeks to establish a “platform of collaboration, not an intervention package.”

For instance, he and his colleagues don’t unilaterally prescribe the 10-o’clock curfew that was part of the Icelandic program. Instead they provide expertise in gathering and interpreting data on what substances students use, how often students use them, where students get them and what negative behaviors are associated with them. By sharing the data with community members, the groups can collaborate and tailor prevention strategies to the locality.

Essential among any strategy is the ability to offer teens a range of activities that help them cope with stress in a healthy way, fill their need for camaraderie and provide a goal to pursue as a team.

“The issue is not what they do; it’s the nature of what they do,” said Kristjansson. “If it is organized, productive, and under the leadership of adults, that is really the core ingredient.”

Kristjansson points out that activities don’t have to revolve around sports. Art, filmmaking or religious activities could serve the same function.

Crafting and maintaining programs to outcompete substance abuse among teens is preferable to treating substance abuse after the fact in terms of cost-benefit, family stability, emotional stability and socially.

And according to Kristjansson, even a temporary effect on tobacco, alcohol and drug use among teens can reduce negative health outcomes in the long run.

“If we can delay the onset by a couple years, then we have the golden egg in our hands.”