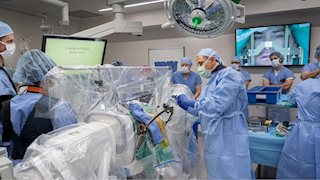 Funded through a grant from the National Institute on Drug Abuse, the clinical trial is led by principal investigator, Dr. Ali Rezai, executive chair of the RNI, and a multidisciplinary team of neurosurgical, psychiatric, neuroscience, and other experts.

The team successfully implanted a Medtronic DBS device in the addiction and reward center of the brain. The trial’s first participant is a 33-year-old man, who has struggled with substance use disorder, specifically excessive opioid and benzodiazepine use, for more than a decade with multiple overdoses and relapses.

“Our team at the RNI is working hard to find solutions to help those affected by addiction,” Rezai said. “addiction is a brain disease involving the reward centers in the brain, and we need to explore new technologies, such as the use of DBS, to help those severely impacted by opioid use disorder.”

The first phase of this clinical trial involves four participants. To qualify, patients will have failed standards of care across multiple levels of WVU Medicine’s comprehensive inpatient, residential, and outpatient treatment programs that include medication, as well as psychological and social recovery efforts.

“Despite our best efforts using current, evidence-based treatment modalities, there exist a number of patients who simply don’t respond. Some of these patients remain at very high risk for ongoing catastrophic health problems and even death. DBS could prove to be a valuable tool in our fight to keep people alive and well,” said Dr. James Berry, interim chair of the WVU Department of Behavioral Medicine and Psychiatry and director of Addiction Services at RNI.

DBS, or brain pacemaker surgery, involves implantation of tiny electrodes into specific brain areas to regulate the structures involved in addiction and behavioral self-control. This study will also investigate the mechanism of the addiction in the brain. The U.S. Food and Drug Administration has approved DBS for treating patients with Parkinson’s disease, essential tremor, dystonia, epilepsy, and obsessive-compulsive disorder. The RNI team routinely uses DBS to treat patients with these disorders.

About the Rockefeller Neuroscience Institute. We are improving lives by pioneering advances in brain health. With the latest technologies, an ecosystem of partners, and a truly integrated approach, we are making tangible progress in our goal to combat public health challenges ranging from addiction to Alzheimer’s, benefiting people in West Virginia, neighboring states, and beyond. Learn more about the RNI’s first-in-the-world clinical trials and the top caliber experts joining us in our mission.