I am fascinated by the health benefits of Pokemon Go!

It's not uncommon to walk around our Pylons lobby and see people swiping away at their phones, or by our Nursing memorial outside the front of our entrance. They're both "Pokestops," where players can swipe for goodies and bonuses for free.

But back to the game. The goal is to capture each of the 142 Pokemon available in the US by capturing the little monsters that appear on the GPS-enabled digital smartphone application. Players then compete in 'gyms' to become the best Pokemon trainers in the world.

The game has gained immense popularity among players of all ages, and motivates game players to get out of their house, connect with others and ambulate to search the surrounding environment for Pokemon.

For example, the first player to catch all that are available in the US spent an average of 6 to 10 hours a night walking through New York City searching for Pokemon.

That is a lot of physical activity!

Using games that interweaves user activity with gameplay is a good start at creating a more active population.

In addition, Jane McGonigal, author of Reality is Broken, argues for the positive effects of video game playing with others, which we also find in Pokemon Go.

This is not to say that everything about the application is perfect.

Distracted game players have walked off cliffs (and survived), walked across the borders of countries, and have been mugged. Like other applications of smart phones and like devices, the game players need to be cognizant of their surroundings and situations. 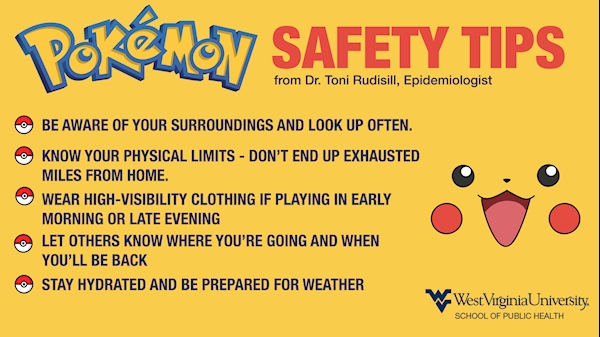 This is is a great way to showcase the work they do every day to make communities safer.

Given the Pokemon craze that I experienced with our older children many years ago, I was amazed by the popularity of the new game.

However, watching over my youngest son’s shoulder, I was impressed that the new game is a pretty cool experience.

I think Pokemon Go is on to something positive for health.

If you're ever in Morgantown, also download the free campus maps the social team at WVU have made showing the best route for all the stops on Evansdale and the Downtown Campus!